What’s The Best Day to Put My House on the Market?

Thursday. Homes that hit the market Thursday typically sell faster and for more money, with more than one in five getting above asking price. Homes listed on Thursdays in April do even better, with one in four going for above asking price.

Homes listed on Wednesday had an advantage of $2,023 in sale price over homes listed on a Sunday, a sale-to-list premium of 0.53 percent. For a $500,000 house, that means you could make $2,650 more just by listing on a Wednesday instead of a Sunday.

For speed, Thursday had a clear advantage, with Thursday-listed homes finding buyers five days faster than the baseline. Homes listed on Thursday also had the edge as far as being more likely to be sold within 90 and 180 days. 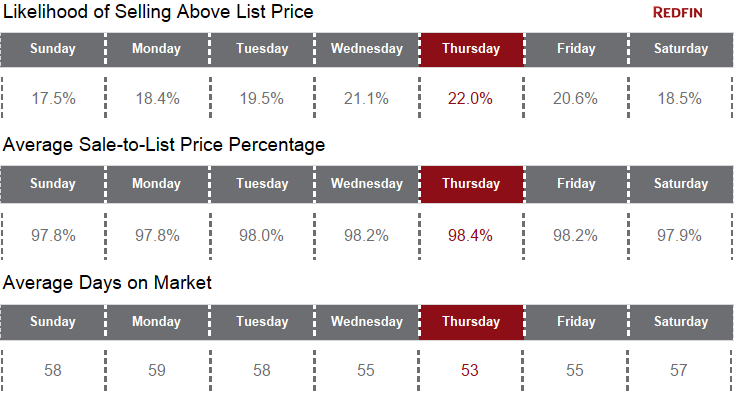 Homes listed toward the end of the work week, when buyers are preparing for their weekend of home touring and open-house hopping, tend to fare the best overall. Nearly 30 percent of homes go up for sale on Saturday, Sunday or Monday, the worst days of the week when it comes to fetching a premium price. Sunday has the worst track record, with homes going for above asking price only 17.5 percent of the time.

Whatever you do, don’t list on a Monday in January. They’re the worst days of the year if you want to get the best price.

To continue searching, you must agree to the Terms of Use.

For the best experience, please provide your cell phone number and select accept below to opt-in to our Terms & Conditions and Privacy Policy to begin receiving text and voice communications.

or make a new notebook

Verify the value of your home,
maximize your investment and see local market activity.

We just need your phone number to finish creating your account.